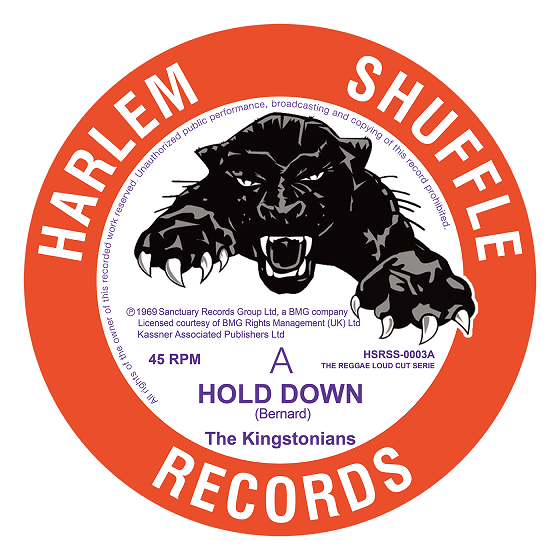 On sale from the 28th of May 2020 - This record is out of stock on our website but available from our resellers. Simply Google "Kingstonians Hold Down Harlem Shuffle Records" to find them worldwide.

Reissued on 7" vinyl for the first time, this is a licensed release of the very rare and  very much in demand HOLD DOWN. It presently trades at about USD500 for a mint copy if you can ever get one.

This track was originally published on the 1969’s 7’ vinyl  single The Kingstonians HOLD DOWN/Barry York WHO WILL SHE BE on Crab (a British reggae label active between 1968 and 1971) and on the 1970 album The Kingstonians' SUFFERER on Trojan.

With "HOLD DOWN" The Kingstonians signed an outstanding track with great vocals, tight lyrics (see below) and a rhythm guaranteed to get these brogues tapping!  This gem quickly became a genuine anthem right next to the likes of 54-46 WAS MY NUMBER or MOON HOP and yet it has never been repressed on 7’ vinyl, hence it’s high collectable value...

"NICE NICE" was originally released on the 1969’s 7’ vinyl  single The Kingstonians NICE NICE /I’LL BE AROUND on Big Shot (a British reggae label active between 1968 and 1971) and on the 1970 album The Kingstonians' SUFFERER on Trojan.

This is another cracking uptempo track, very typical of The Kingstonians & Derrick Harriott’s production at that time and a perfect flip side for the A side anthem.